A Guide To Growing Poppies

Sometimes in the countryside you can turn a corner and ….stop dead in your tracks. Poppies, thousands of them, are an arresting sight, dazzling in their intensity, charismatic and evocative. Carpeting huge areas in an ethereal mist of paper thin petals, painting the landscape crimson red.

For your garden there are dozens of oriental poppies (papaver orientale) to choose from, many different shapes, sizes and textures. They have been grown in this country since the 1700s with more interesting varieties introduced from the start of and throughout the last century.

Here are some of our favourites:

‘Picotee’ has white petals edged with orange, ‘Patty’s Plum’ is a pinky/purple with blotches of black, while ‘Karine’ has large saucers of pale pink with a cherry red and black middle. ‘Snowgoose’ has white and pink petals with a purple centre and can tolerate drought very well.

Perhaps the most flamboyant, the Danny la Rue of the poppy world, is ‘Beauty of Livermore’ with strong tall stems and a superb single pillar box red bloom containing a star burst black centre.

These clump forming hardy perennials, that reach up to 3ft tall, will start to grow early in the season but flower for only a few days. However, each clump will produce a succession of blooms so you may have many open at the same time producing a wonderful display.

‘Super Poppies’ are a relatively new development stemming from the USA. They are hybrids specifically designed with thicker petals to last longer, each bloom will perform for over two weeks. You can then cut them back and be rewarded with a second show.

Of these, stand out varieties are ‘Heartbeat’ with a robust habit and deep red petals around a black centre; ‘Medallion’, resplendent with Barbara Cartland raspberry pink flowers, ‘Tequila Sunrise’ has pretty frilled creamy orange petals, and ‘Aurora’, with its bright orange flowers, will be just right for a ‘hot bed’. 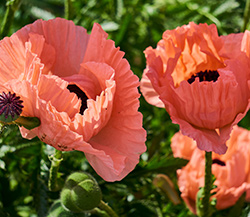 Poppies enjoy a sunny location (although super poppies have a tendency to fade, so don’t worry about positioning those in partial shade). If the soil, that should be slightly acidic, isn’t well drained, dig in some grit and organic matter.

Clumps can be lifted and divided in the autumn and propagation is simple from root cuttings. Use cuttings taken close to the crown, about 1in long. The cutting should be pushed upright into a sandy compost with the thick end level with the surface, then cover with a layer of grit and water.

There are few other plants that can put on such a spectacular performance, indispensable in early summer, poppies are the flamboyant showstoppers whose blooms die before they get old.