Every year John Taylor Hospice hosts their Light Up a Life event during December and this year was no different. Families and friends came together for the event, remembering people they have loved and lost while celebrating their achievements.

Hosted at Harvest Fields Centre in Sutton Coldfield on Friday 6th December, this years event was as moving and as magical as ever. Including live music performed by the Rock Choir, remembrance readings and an update on some of the hospice’s latest news. The event then moved outside for the main event, the illumination of the ‘Tree of Lights’, where anyone can hang a special Light up a Life star on the tree in honour of a passed loved one. Followed then by delicious hot drinks, mince pies and other refreshments, the event is a yearly tradition for many, and a new experience for others.

Ken Trueman from Great Barr came with his family to remember Brenda, his wife of 52 years. He commented: “Brenda was cared for at home for a few weeks by the Hospice at Home Team. We were all so well looked after and they really were golden. Brenda died 20 months ago and this event is a special way for us to remember her.”

Since Brenda was cared for in 2018, Ken’s friendship with John Taylor and the staff who work and volunteer there has continued. He now regularly attends a weekly social group and volunteers his time to help raise valuable funds to support the work of the hospice.

Ken added: “I visited the hospice to drop off some of Brenda’s clothes for the charity shops. When I was there I bumped into some of the nurses that cared for her and we got chatting. They told me about the Friday Social Group which I now go to. I also decided to start volunteering and have been part of the team at the hospice’s charity shop in Wylde Green since it opened in November 2018. It’s a great team, we’re really close-knit and I enjoy it.”

The guidance and aid work which John Taylor is known for really does help those in need of support and it’s great to see such positive outcomes such as Ken’s story and how he himself now volunteers his own time to help others and raise funds towards the hospice.

This year’s Light up a Life also saw Angela Nankervis with her husband Paul, daughter Nicole and nine-year-old granddaughter Lanai join in with the occasion for the first time. Angela was there remembering her mum Daisy who died in December 2017 and her sister Diane who died at John Taylor Hospice in 2011.

Anglea commented: ”It was my daughter who told me about Light up a Life as she lives near Harvest Fields and saw it advertised. We’ve not been to one before but it sounded like such a lovely idea. My sister was cared for at home and at the hospice, she was 44 when she died.” 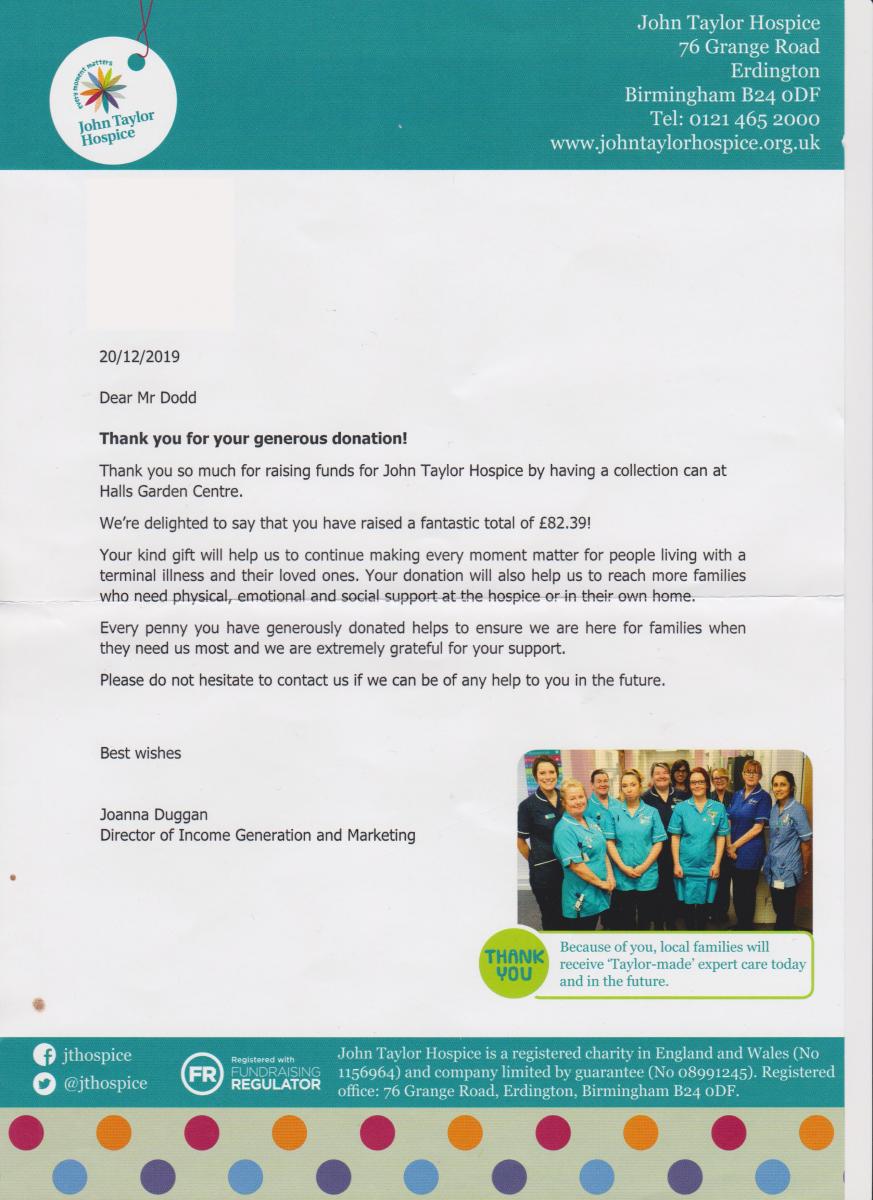 Comments like these are a true credit to the John Taylor hospice and all who work there and show just how important and special events like Light up a Life are to those who have lost a relative or been involved with care or support through the work that they offer.

To show our own support, Halls Garden Centre gladly donated the 14ft real Christmas tree which John Taylor hospice used during the event and was lovingly decorated with lights and remembrance stars by the public.