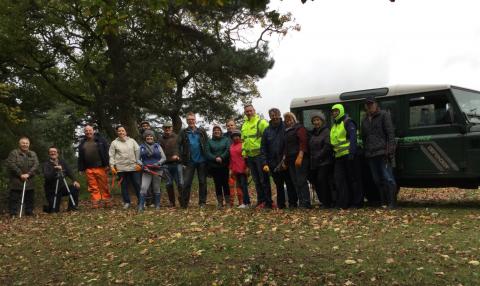 Last weekend on Saturday 21st October, the Friends of Mossy Bank group met up along with residents from the local area, councilors, Sutton Coldfield park rangers and our very own David Coton from Hall's Garden Supplies in order to spend a few hours initiating a clean up of the area and planting some flower bulbs that will hopefully create a beauiftul and coliourful display next Spring.

Mossy Bank is a grassy area located next to Boldmere School. In 2016 plans were made to use the grassy plot of land to build a £50,000 playground where children could play safely and get some fresh air and exercise, however unforunately this plan was cancelled. Following the cancellation of the playground and after residents were disheartened, the Friends of Mossy Bank group was formed, initially suggested by Rob Pocock (Sutton Vesey Ward Councillor) and it was decided that a formation of a working group would help lead to reclaim ownership of the area, with hopes to turn it from an abandoned area known for anti-social behavior to something much more beautiful and useful for the community, especially for the younger generation to play, have fun and get some fresh air.

Support from Birmingham City Council's Park Manager John Porter kindly arranged for a Park ranger to come along to the groups first meet up, providing a range of suitable tools including safety gloves, litter pickers, pruning and planting tools for all to use including himself. Ourselves at Hall's Garden Supplies were able to donate a bunch of daffodil bulbs, which were eagerly planted along the bank and around where a recently removed disused sub station stood, this was another success in recent weeks that the group were able to achieve from contacting the head of western power, removing an abandoned eyesore within the bank and overall improving the look of the area.

Lynette Richards and Mandy O’Reilly the founders of the Friends of Mossy Bank group and local residents commented:

"We really appreciate all of the input, ideas and efforts, we would love to see more people get involved and contribute to the group, together we are demonstrating that we are making a difference to Mossy Bank and to the Boldmere area."

The group will next meet in November/December to once again get stuck in for a mini makeover with grander plans in the new year to gain greater support and funding that will coinside with Sutton Coldfield in Bloom.

For more information or if you'd like to come along and help during our next mini-makeover, please visit the Friends of Mossy Bank Facebook page https://www.facebook.com/friendsofmossybank/